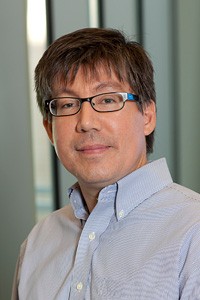 Professor Sorensen was born and raised in upstate New York and received his B. A. degree in Chemistry from Syracuse University, where he performed undergraduate research with Professor Roger Hahn. In 1989, he began his graduate studies in chemical synthesis at the University of California, San Diego. Under the direction of Professor K. C. Nicolaou, he synthesized a novel family of DNA cleaving, 10-membered ring enediynes, contributed to a laboratory synthesis of the cancer drug taxol and co-authored a book titled Classics in Total Synthesis, and obtained his Ph. D. degree in 1995. From 1995-1997, he was a National Science Foundation postdoctoral fellow in the laboratory of Professor Samuel Danishefsky at The Memorial Sloan-Kettering Cancer Center in New York, where he contributed to total syntheses of the epothilone class of antitumor agents. In 1997, he started his independent career at The Scripps Research Institute and became an Associate Professor with tenure in 2001. In 2003, he moved his research group to Princeton University where he is the Arthur Allan Patchett Professor in Organic Chemistry.

The Sorensen laboratory is interested in the field of complex chemical synthesis, questions about the structural origins of architecturally unique natural products, and evaluating hypotheses about the chemical basis of the biological activities of natural products and non-natural molecules. His research aims to increase the capabilities of organic synthesis through the development of powerful reactions and strategies.

For his achievements in chemical research and education, Professor Sorensen received a Beckman Young Investigator Award, a Camille Dreyfus Teacher-Scholar Award, the AstraZeneca Award for Excellence in Chemistry, the Lilly Grantee Award, the Pfizer Global Research Award for Excellence in Organic Chemistry, and the Bristol-Myers Squibb Unrestricted Grant in Synthetic Organic Chemistry. In 2001, Professor Sorensen was a Woodward Scholar at Harvard University. In 2007, he was the Givaudan/Karrer Distinguished Visiting Professor at the University of Zürich. In 2009, he received the Arthur C. Cope Scholar Award from the American Chemical Society.

In the Frick Chemistry Laboratory, our office sits on the second floor of this beautiful building.

We’d love to hear from you. Tell us all about it by filling out our contact form.

Want to keep up with what’s going on in our group? Follow us across our Social Networks.